BALZaC (for Bitcoin Abstract Language, Analyzer and Compiler) is a domain-specific language to write Bitcoin transactions, based on the paper [AB+18FC]. Balzac features a simple syntax to express Bitcoin transactions. We illustrate it through a series of examples, that you can experiment with in the online editor.

The output field of transaction T contains a value, 50 BTC, and an output script, fun(x) . x==42. This means that 50 bitcoins will be transferred to any transaction which provides a witness x such that x == 42.

To append T to the Bitcoin blockchain, the placeholder _ for the input must be replaced with the identifier of an unspent transaction already on the blockchain, which has at least 50 BTC.

You can use the web editor to write Balzac transactions, to check their syntax, and to compile them into actual Bitcoin transactions. The output of the compiler is a serialized transaction for the Bitcoin test network (testnet). To generate transactions for the main network (mainnet), one must specify the network as follows:

For instance, let us paste transaction T into the editor and then let us add command eval T to it. Now, if we hit the button Evaluate, the web editor shows in the output box the transaction T in Bitcoin (testnet) serialization format. 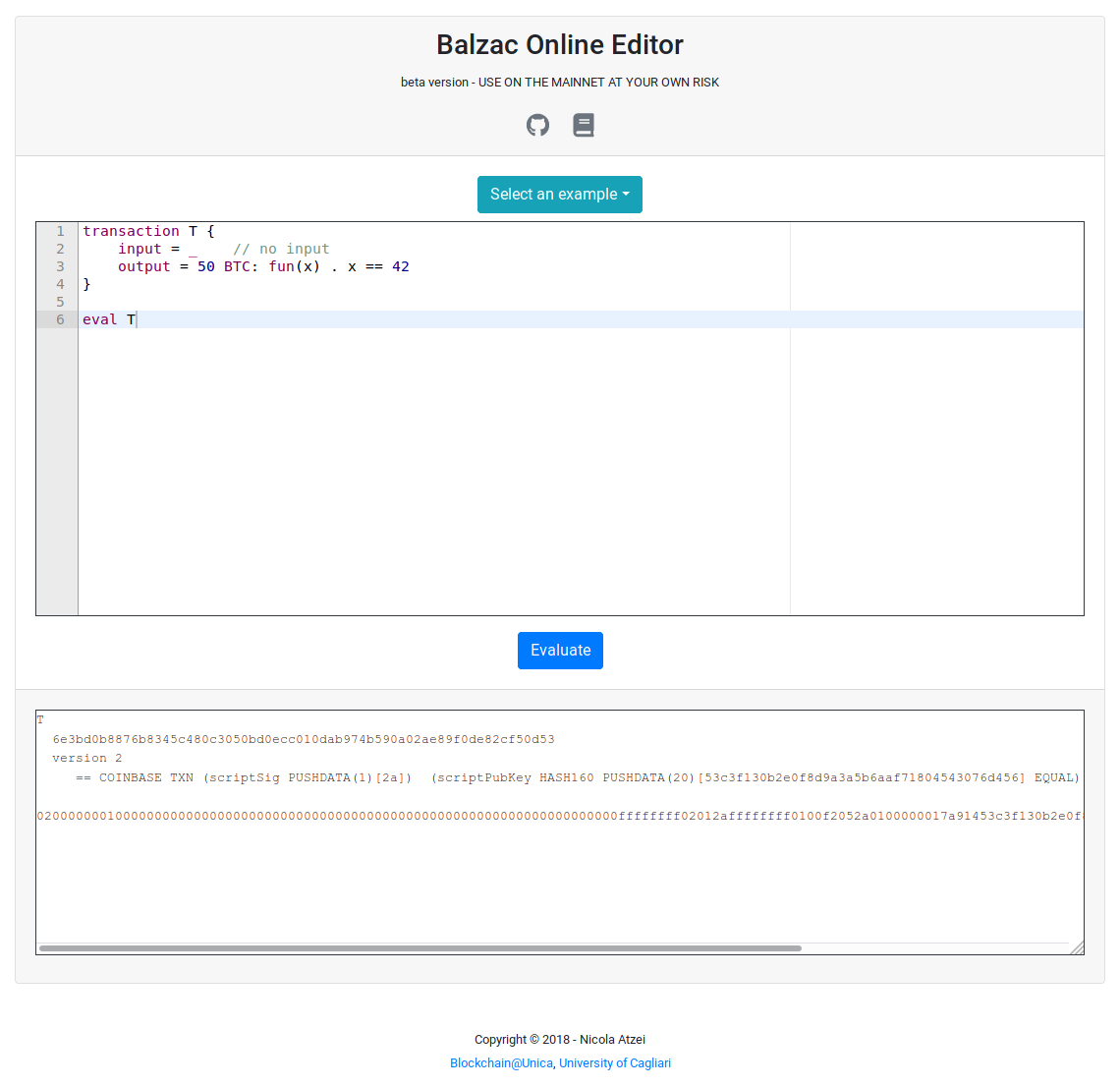 The serialized transaction can be sent to the Bitcoin network using the Bitcoin client command bitcoin-cli sendrawtransaction. However, in order to be published, T must redeem a real transaction on the blockchain. In Balzac, it is possible to define a transaction using its hex format, for example:

If one needs to use the bitcoin stored within T, she can redeem it with the following transaction:

Transaction T1 redeems T by indicating it in the input field, and by providing the number 42 as witness. The value 42 is the actual parameter which replaces the formal parameter x in the output script fun(x) . x == 42, and makes the script evaluate to true. Any other witness would make the script evaluate to false, and would prevent the transaction T1 from being added to the blockchain. A transaction cannot be spent twice: hence, once T1 is on the blockchain, no other transaction having T as input can be appended.

Note that T1 is redeeming exactly the 50 BTC deposited in T: in practice, to be able to append T1 to the blockchain, the value in output of a transaction must be strictly less than the value in input. The difference is retained by Bitcoin miners as a fee for their work. Currently, transactions with zero fee are not likely to be added to the blockchain.

Now, let us insert both T and T1 in the editor. While we write, the editor performs some static checks and signals the errors. For instance, if instead of the value 42 we provide another witness for T (say for instance value 4), the editor will display a warning. If the input field of T1 has a wrong reference (say T3), or if the total amount of outgoing bitcoins is greater than the incoming one, the editor will signal the error.

The output scripts of T and T1 are naive, since anyone can produce the right witnesses. Usually, one wants to transfer bitcoins to a specific user. For instance, the following transaction T2 makes the 50 BTC of T1 redeemable only by user Alice:

The constant pubA declares Alice’s public key. Users may generate as many public keys as they want.

The predicate versig(pubA; x) in the output script of T2 is true if x is a valid signature of the transaction which redeems T2, computed with Alice’s private key.

The witness sig(kA) is the signature of transaction T3 (without considering the witness itself) using the private key kA.

You can use the online form on the sidebar to generate new addresses and keys.

Transactions can have more than one output, in order to split the money on different recipients. For instance, the amount of bitcoins in T4 is split in two parts:

In this transaction, the output field has two items, that can be redeemed separately.

Transactions can have more than one input, in case they need to gather money from several sources. For each input, the transaction must provide a suitable witness. In case inputs refer to a transaction with multiple outputs, their outputs are numbered starting from 0. For instance:

Transaction definition can be parametric. For instance, in the following example T6 takes one parameter of type pubkey and uses it in the output script.

To be able to evaluate T6, one must instantiate that one parameter, like:

One can also use T6 in the definition of its redeeming transaction, as follows:

In case the parameter is a witness, it can be left unspecified as long as it is needed, using the symbol _. For instance, transaction T9 is obtained by T8, without providing a witness :

The generation of a signature inside a transaction is done at compilation time, so that all the parameters have been instantiated. Indeed:

Balzac supports the definition of participants.

Participants can be declared as participant Alice {...} and enclose constant and transaction declarations. Consider the following example:

The snippet above defines two global declarations pubA and fee, that are globally visible within the same file.

Private local declarations are preceded by the keyword private: a private declaration is visible only within the participant in which is declared. In the following example the constant kA is not visible outside the Alice’s participant.